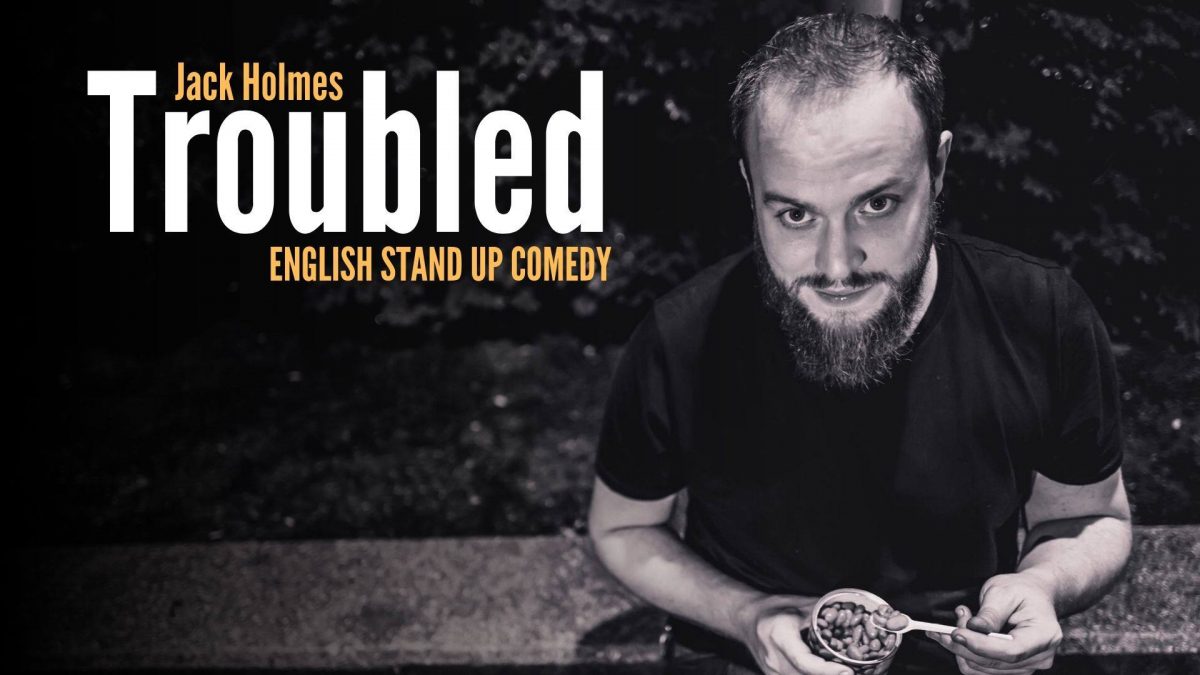 “In Stitches – Comedy in Austria” presents a night of hilarious English Stand up comedy with Jack Holmes. Some of the profits will be donated to Solidarity NOT Silence, more info below.

For the first time ever, “local legend” Jack Holmes is bringing his solo show “Troubled” to his home town. In the near 2 years since his performing his last full hour in Vienna, Holmes has been busy building a name for himself not just across the rest of Austria, but continental Europe and beyond, selling out shows everywhere from Russia to Egypt, appearing at major festivals and opening for some of the most respected Comedians in the world.

Embittered and armed with his quick wit and sharp tongue, Jack has developed a comedic style that’s guaranteed to entertain. Equal parts honest, vicious, and playful, his act mixes brutal self-deprecation with bewilderment and frustration at the world around him, creating a show every bit as heartwarming and endearing as it is gut wrenchingly hilarious.

Opening act: Liz Donehue
Liz Donehue grew up in Seattle, where she realized she wanted to do more with her Creative Writing degree than sleep on her mom’s couch and watch reruns of Ghost Adventures. After relocating to Minneapolis in 2011, she began shaping her edgy and assertive style of comedy at Acme Comedy Company and the Comedy Corner Underground. One year after stepping on stage for the first time, Liz was voted a finalist in the “Funniest Person in the Twin Cities” contest for her sharp and percipient humor.

ABOUT SOLIDARITY NOT SILENCE:
Solidarity NOT Silence are a group of Woman who are fighting a claim of defamation made against us by a well-known musician (hereon referred to as A). We refuse to be silenced and we need your solidarity to fight this case.
“Our group includes one of A’s ex-girlfriends, one of several of his former partners who are facing a libel claim, and feminist musicians who spoke out in support of these women. Legal papers have been served against all of us. By coming together as a group, we have managed to personally fund our legal defence through the various stages up until the claim was finally served against us in court on 2 August 2017. Not only has this lengthy process been very expensive, there has also been tremendous emotional and psychological impact. Most of us have suffered severely with our mental health as a result, but we refuse to give up”

This website uses cookies to improve your experience while you navigate through the website. Out of these, the cookies that are categorized as necessary are stored on your browser as they are essential for the working of basic functionalities of the website. We also use third-party cookies that help us analyze and understand how you use this website. These cookies will be stored in your browser only with your consent. You also have the option to opt-out of these cookies. But opting out of some of these cookies may affect your browsing experience.
Necessary immer aktiv

Any cookies that may not be particularly necessary for the website to function and is used specifically to collect user personal data via analytics, ads, other embedded contents are termed as non-necessary cookies. It is mandatory to procure user consent prior to running these cookies on your website.