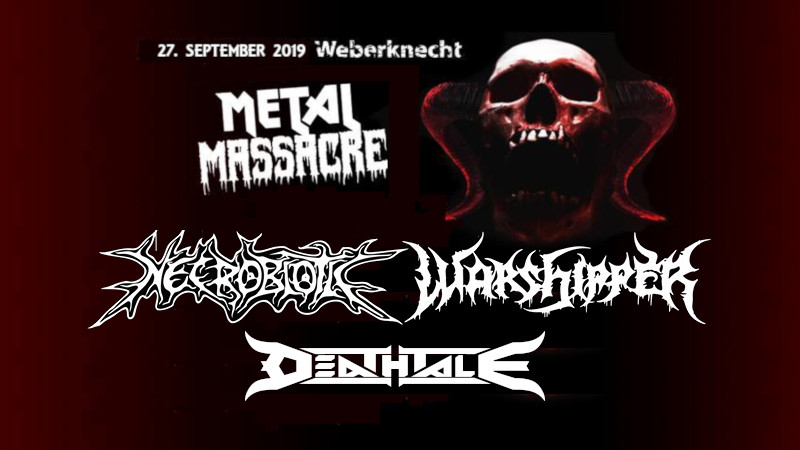 Necrobiotic (BRA – Death Metal/Splatter/Grindcore)
Necrobiotic is a Brazillian Old School Death Metal band, born in 1994, with 1 demo tape, 3 albuns, 1 EP and a new album to be released before their second Europen Tour. They have done already several Brazilian tours, one South American Tour, and one European Tour in 2018. Time to come back!
https://www.facebook.com/Necrobiotic/
https://www.songsforsatan.com/necrobiotic

Warshipper (BRA – Death Metal)
Warshipper is a Brazilian Death Metal band, with a lot of experimentalism in their music, its a sound with its own personality. They release 1 EP and 1 album until now, and they will release their second album before their first European Tour!
https://www.facebook.com/Warshipper/
https://warshipper.bandcamp.com/

Deathtale (Death/Thrashmetal)
DEATHTALE is the project of Demolition Founder and Ex-Drummer TomKräutner and Bassman Phil Späth. In 2017, DEATHTALE signes a contract with the spanish Label ART GATES RECORDS and releases the current third Album “The Origin Of Hate” in 2018.
https://www.facebook.com/deathtaleaustria/
http://www.deathtale.at/

This website uses cookies to improve your experience while you navigate through the website. Out of these, the cookies that are categorized as necessary are stored on your browser as they are essential for the working of basic functionalities of the website. We also use third-party cookies that help us analyze and understand how you use this website. These cookies will be stored in your browser only with your consent. You also have the option to opt-out of these cookies. But opting out of some of these cookies may affect your browsing experience.
Necessary immer aktiv

Any cookies that may not be particularly necessary for the website to function and is used specifically to collect user personal data via analytics, ads, other embedded contents are termed as non-necessary cookies. It is mandatory to procure user consent prior to running these cookies on your website.